Twat of the Week: Andrew Marr

I know I said voting for Twat of the Week would close tomorrow but I’ve got things to do in the morning and I’d probably forget.

The first Twat of the Week, as nominated and voted for by the public, is …

Glaswegian Marr’s racial slur against the English in his Sunday morning politics programme last week has resulted in many complaints to the BBC and now the first Twat of the Week award of 2010.

Andrew Marr, you’re a racist, a second-rate presenter and – officially – a twat. 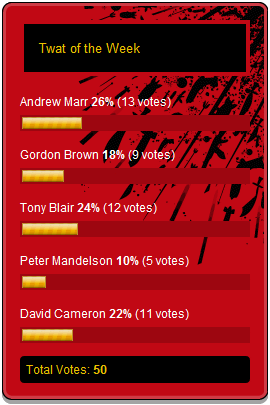 The following a transcript of the relevant part of the interview:

Rylance: I think it’s about the question of what is indigenous Englishness. I think it’s clearer to look at the Welsh and the Irish and the Scottish and grasp … maybe you can’t put words to it but there’s certain kind of things that are very much part of their nation’s character and it’s harder perhaps because of our imperial past and the nature of the history of England to be pleased or proud about being English. We used to have at the Globe a lot of difficulty trying to celebrate Shakespeare’s birthday and St Georges Day without the National Front coming in you know?

Rylance: And I remember Ken Livingstone and I think still Boris is trying to figure out how …

Marr: How you celebrate because part of this is very sort of dark and dysfunctional too isn’t it? And I mean just thinking about that ghastly story from Doncaster this week, I mean there is a certain amount of wildness and madness and cruelty. There’s cruelty in the play but there’s cruelty in Englishness too. It’s not just an easy thing to celebrate.

Can you imagine the outcry if a BBC presenter had said there’s cruelty in Scottishness or Polishness or Chineseness?

Why on earth should we allow ourselves to be racially abused by a second-rate Scottish TV presenter for the British Broadcasting Corporation? Well I for one won’t be – the following complaint has been made to the BBC regarding Andrew Marr’s racism and demanding a public apology.

Had any other nationality been described as cruel there would have been an instant apology on-air yet because it is the English he has made a racist comment about, no apology was made.

I demand an unreserved apology on-air from Andrew Marr on next week’s show for his racial slur.

The programme can be watched again on the BBC iPlayer here. Fast forward to about 24 minutes.