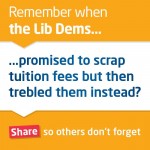 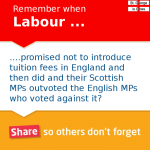 He said that under devolution it is right that there should be differences in the two nations and he’s absolutely right – the whole point of devolution is that we have different needs and priorities but the problem is that we don’t have devolution, Scotland does. The master of hypocrisy said:

There’s no point in having devolution if you don’t have devolved and different policy outcomes and that’s precisely what we have in higher education.

You either believe in the Scottish nation, as I do, and that you have Scottish solutions to Scottish issues or you don’t.

We believe that it is quite right, as longstanding supporters of proper devolution and indeed further devolution, that you have different solutions in different parts of the country.

I’ve sent the following email to his office:

In yesterday’s Daily Telegraph you are quoted as saying “You either believe in the Scottish nation, as I do, and that you have Scottish solutions to Scottish issues or you don’t”.

Do you believe in the English nation? Why do you campaign for the break-up of England into regions we don’t want?

7 out of 10 people want to either stop MPs not elected in England from meddling in English affairs or a devolved English Parliament. Why do you believe they shouldn’t have what they want but the Scots, Welsh & Northern Irish should have just that? It seems to me the Liberal Democrats should be renamed the Illiberal Hypocrites because you are neither liberal nor democrats.