Ve have vays of making you eat healthily

October 15, 2006 wonkotsane Police State No comments
! This post hasn't been updated in over a year. A lot can change in a year including my opinion and the amount of naughty words I use. There's a good chance that there's something in what's written below that someone will find objectionable. That's fine, if I tried to please everybody all of the time then I'd be a Lib Dem (remember them?) and I'm certainly not one of those. The point is, I'm not the kind of person to try and alter history in case I said something in the past that someone can use against me in the future but just remember that the person I was then isn't the person I am now nor the person I'll be in a year's time.

A school in Kent forced a pupil to eat his lunch outside the dinner hall because his packed lunch breached their guidelines on healthy eating.

The school has a rule that meals are allowed a maximum of 2 snacks but 10 year old Ryan Stupples had a fromage frais yoghurt, a packet of cheese biscuits and a cake.  The child was removed from the dinner hall and made to eat his lunch outside the hall under supervision.

BBC News have a picture of the boy in question who, if anything, looks a bit thin.  A bit of junk food might do him some good, fatten him up a bit. 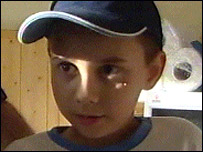 I remember my kids being told once that they weren’t allowed to bring sweets to school in their packed lunch.  I made a point of sending them with them again because it is entirely up to me what my kids eat.  They very rarely have sweets and chocolate and they are all the right weight for their age and size.  In fact, Satan Joseph is too bloody thin, we can’t seem to fatten him up.

If any of my kids were removed from the dinner hall because of what I’d put in their lunch boxes I’d be straight round to the school.