January 13, 2007 wonkotsane Anglophobia, Britain, England, Labour, Scotland 4 comments
! This post hasn't been updated in over a year. A lot can change in a year including my opinion and the amount of naughty words I use. There's a good chance that there's something in what's written below that someone will find objectionable. That's fine, if I tried to please everybody all of the time then I'd be a Lib Dem (remember them?) and I'm certainly not one of those. The point is, I'm not the kind of person to try and alter history in case I said something in the past that someone can use against me in the future but just remember that the person I was then isn't the person I am now nor the person I'll be in a year's time. 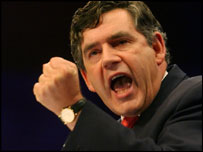 If you listen very carefully you can still hear the tinkling of the dropping penny down at Downing Street.According to our leader-in-waiting, the UK is being menaced by an “opportunist group of nationalists” who are “playing fast and loose” with the union.

Apparently, “it is very important to recognise that Britishness and Britain itself is not based on ethnicity and race” but “it is founded on shared values that we hold in common: a commitment to liberty for all, a commitment to social responsibility shown by all, and a commitment to fairness to all.”

On the subject of the Conservatives “English Votes on English Laws” proposal, the Tartan Taxman said that it would pull the union apart.  However, he fails to offer an alternative solution to the West Lothian Question whereby he and his colleagues elected in Scotland can vote on matters that only affect England and not their own constituents.

Alex Salmond, the leader of the SNP, says that the Ignorant Jock is only protecting his own interests and that “he is equally blind to legitimate English grievance of bossy Scottish Labour MPs interfering in English only matters, such as health and education”.

The hypocrite then goes on to say that “it is now time for supporters of the Union to speak up, to resist any drift towards a Balkanisation of Britain and to acknowledge Great Britain for the success it has been and is.”

Balkanisation, for those of you who may not be familiar with the term, is the act of breaking up a country or region into smaller competing regions.  Labour have done just this by giving Scotland, Wales and Northern Ireland back their nationhood with their own governments and breaking England up into 9 euroregions.

How dare this ignorant, hypocritical fool criticise nationalists when he is one of those responsible for the rise in nationalism and seperatism thanks to his anti-English hypocracy and discrimination.