Fuel protests in London and Cardiff

May 27, 2008 wonkotsane Transport One comment
! This post hasn't been updated in over a year. A lot can change in a year including my opinion and the amount of naughty words I use. There's a good chance that there's something in what's written below that someone will find objectionable. That's fine, if I tried to please everybody all of the time then I'd be a Lib Dem (remember them?) and I'm certainly not one of those. The point is, I'm not the kind of person to try and alter history in case I said something in the past that someone can use against me in the future but just remember that the person I was then isn't the person I am now nor the person I'll be in a year's time.

Hundreds of hauliers are heading to both London and Cardiff to protest at obscene fuel prices. 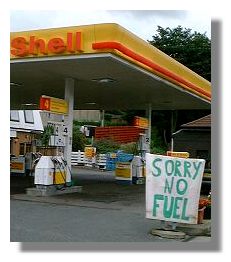 The Wales protest will be travelling from Llanelli to Cardiff and the London protest is going from Kent to London.

The British government blames high oil prices for the price of fuel but this is bollocks – about 80% of the price of fuel is down to tax and rising oil prices have given the Treasury a massive windfall from fuel duty. If they weren’t pissing it up the wall on fucking stupid things that we don’t want like the EU and ID cards there’d be plenty of money to plug any gap in the budget caused by dropping – or even abolishing – fuel duty. And that’s without even considering the boost to the economy from the reduction of any tax.

Hauliers can bring the country to its knees in days – all they have to do is stop delivering fuel and food and supermarkets will be empty and petrol stations will start running out of fuel. The country would grind to a halt and the British government would probably fail. Of course, that would require the likes of Eddie Stobart and Christian Salvesen to join the protests which is not particularly likely because they base most of their fleet either in France or in the South East of England where they can travel to France to fill up on cheap fuel.