November 3, 2009 wonkotsane Federal Europe, Tories, Traitors No comments
! This post hasn't been updated in over a year. A lot can change in a year including my opinion and the amount of naughty words I use. There's a good chance that there's something in what's written below that someone will find objectionable. That's fine, if I tried to please everybody all of the time then I'd be a Lib Dem (remember them?) and I'm certainly not one of those. The point is, I'm not the kind of person to try and alter history in case I said something in the past that someone can use against me in the future but just remember that the person I was then isn't the person I am now nor the person I'll be in a year's time.

Conservative Home has confirmed what we’ve been saying along – the Tories will not hold the referendum they promised on the Lisbon Treaty/EU Constitution.

Tim Montgomerie has tried to spin David Camoron‘s treachery claiming that the last line of his cast-iron guarantee to hold a referendum means that no promise is being broken:

Today, I will give this cast-iron guarantee: If I become PM a Conservative government will hold a referendum on any EU treaty that emerges from these negotiations.

… isn’t a “cast-iron guarantee” to hold a referendum on the EU treaty that emerged from the negotiations – namely the Lisbon Treaty.

Montgomerie then goes on to say that David Camoron, having lied to his party, the Sun and the electorate by saying that he will hold a referendum on the Lisbon Treaty/EU Constitution when he has no intention of doing so, “deserves the continuing support of eurosceptics”. On what basis?

The next Conservative government will seek a “manifesto mandate” for renegotiation

And this shows how findamentally dishonest David Camoron, the Tories and Conservative Home are. When the Lisbon Treaty/EU Constitution comes into force it is not possible to renegotiate our relationship with the European Empire.

The British government will not be able to repatriate powers from the European Empire without the unanimous agreement of every member state.

The Lisbon Treaty/EU Constitution introduces qualified majority voting – where we no longer have a veto – for a huge amount of policy areas.

The Lisbon Treaty/EU Constitution is not a menu from which we can pick and choose the least damaging and costly clauses – it replaces the Treaty of Rome, the treaty that established the EEC (now the EU). It would be like Puerto Rico joining the United States and picking only half od the US constitution.

The only way to renegotiate our relationship with the European Empire is to leave.

But even if David “I don’t agree Britain would be better off by leaving the European Union” Camoron was forced into holding a referendum on leaving the European Empire it would still require the unanimous agreement of all member states before we could leave following a two year “cooling off period”.

I don’t agree Britain would be better off by leaving the European Union. Instead, we need to work within the EU to fight for change but on the question of referendums, I do want to see one on the EU Treaty because that’s what everyone was promised. The Conservative Party is campaigning very hard on just this. Other European leaders say the latest EU Treaty is a return of the constitution in all but name so whether or not he keeps the promise to hold the referendum is a real test for Gordon Brown. It will show whether he means what he says when he talks about restoring trust in government, and involving people more in decisions.

Hoisted by his own petard. David Camoron promised a referendum on the Lisbon Treaty/EU Constiution and he has renaged on that promise. This was a real test for the man widely expected to be prime minister next year and he failed. In his own words, it shows that he doesn’t mean what he says about restoring trust in government and involving people more in decisions.

David Camoron is a fundamentally dishonest man, as is the Conservative and European Unionist party he leads. The vast majority of the Tory membership is opposed to the Lisbon treaty/EU Constitution, they are opposed to the European Empire and the wholesale transfer of our sovereignty to unelected eurocrats on the continent but they have been betrayed by their leader and his euofederalist colleagues.

But don’t have too much sympathy for the eurosceptic Tories who have lost their party to eurofederalist traitors – they have allowed it to happen and they allow it continue happening by continuing to support the party that has betrayed them. And people like Tim Montgomerie – collaborators with, and apologists for, the eurofederalist leadership – deserve no sympathy at all for losing the party they have worked so hard for. They sense that power is within their grasp and even though their party no longer represents their views, they will happily put their principles to one side and betray their country to be part of it. 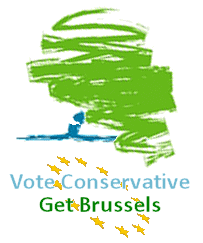 If the Conservative Party no longer represents your views (how could it?) then you have two options. You can either continue to support and vote for the Tories and allow yourself to be part of David Camoron‘s eurofederalist mandate or you can vote for a party that does represent your views, one that will withdraw this once great nation from the European Empire. That party is, of course, UKIP.

Don’t let yourself be conned into believing that you have to vote Conservative to stop Liebour or the Lib Dims from getting into power – why vote for someone you don’t want to keep out someone else you don’t want? Lesser of two evils? Don’t make me laugh – there’s barely a cigarette paper between Liebour and the Tories. David Camoron will never renegotiate our relationship with his beloved European Empire, the Tory policy of “reform from within” is a falacy.

Vote Conservative, get Brussels. Vote UKIP, get our country back.