November 6, 2009 wonkotsane Economy No comments
! This post hasn't been updated in over a year. A lot can change in a year including my opinion and the amount of naughty words I use. There's a good chance that there's something in what's written below that someone will find objectionable. That's fine, if I tried to please everybody all of the time then I'd be a Lib Dem (remember them?) and I'm certainly not one of those. The point is, I'm not the kind of person to try and alter history in case I said something in the past that someone can use against me in the future but just remember that the person I was then isn't the person I am now nor the person I'll be in a year's time.

British Airways has reported a £292m pre-tax loss for the last 6 months. 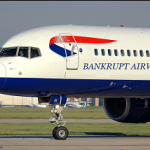 The chief exec of BA says that revenue was down 13.7% in the last 6 months and next year it is likely to be £1bn less than last year.  On top of this, they are facing more strikes from staff unhappy at attempts to cut costs and introduce efficiencies that might stop BA going bankrupt.  It’s like British Leyland all over again.

Still, there’s some hope of assistance from the British government – a new tax came into force on the 1st of November which will add an extra £300 onto the cost of flights for a family of four to holiday to the Carribean.  The extra cost will mean less people can afford to fly and … oh dear, it’s not looking hopeful for BA is it?