January 3, 2010 wonkotsane General 10 comments
! This post hasn't been updated in over a year. A lot can change in a year including my opinion and the amount of naughty words I use. There's a good chance that there's something in what's written below that someone will find objectionable. That's fine, if I tried to please everybody all of the time then I'd be a Lib Dem (remember them?) and I'm certainly not one of those. The point is, I'm not the kind of person to try and alter history in case I said something in the past that someone can use against me in the future but just remember that the person I was then isn't the person I am now nor the person I'll be in a year's time.

According to BBC Radio Shropshire, there has been an explosion in Shrewsbury town centre.

The emergency services aren’t giving much information but there have been injuries.  Three people have been sent to the nearby Royal Shrewsbury Hospital and one has been airlifted to Selly Oak Hospital in Birmingham.  Three air ambulances and ten land ambulances are involved in the emergency.

Twitter is showing what a fantastic real-time news source it is.  According to people on Twitter it’s a gas explosion near Rowley’s Mansion, which seems to be backed up by the presence of a Transco van.

An empty building has been destroyed by the explosion on the corner of Mardol Quay and Bridge Street – one of the busiest junctions in Shrewsbury.  The explosion has closed Frankwell, the Welsh Bridge, Riverside, Bridge Street and the streets in between.  The town centre is effectively closed and should be avoided.  The explosion was in a flat above an empty shop between Shrewsbury Hotel and a photo studio.

The explosion was strong enough to send rubble over the river, damaging the Theatre Severn.  It’s roughly double the distance shown from this webcam.

The BBC News channel was saying earlier that a person was trapped inside the collapsed building but that appears not to have been the case.

Below is a map showing where the explosion took place and some pictures of the site. Theatre Severn and the Sixth Form College are also shown on the map – both were damaged by debris from the explosion.

For more pictures, check out this BBC “In pictures” page. 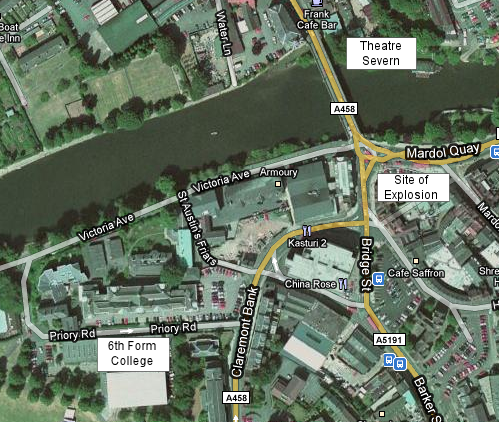 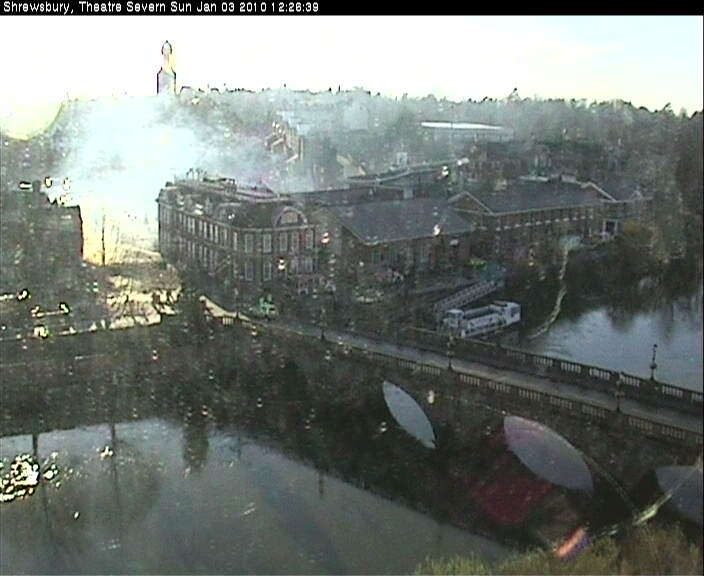