April 26, 2011 wonkotsane Economy 2 comments
! This post hasn't been updated in over a year. A lot can change in a year including my opinion and the amount of naughty words I use. There's a good chance that there's something in what's written below that someone will find objectionable. That's fine, if I tried to please everybody all of the time then I'd be a Lib Dem (remember them?) and I'm certainly not one of those. The point is, I'm not the kind of person to try and alter history in case I said something in the past that someone can use against me in the future but just remember that the person I was then isn't the person I am now nor the person I'll be in a year's time.

HMRC is targeting plumbers in its latest attempt to extort a bit more money out of us proles.  This is a similar exercise to the recent one where they targeted 30,000 doctors and ended up getting money out of just 5% of them. 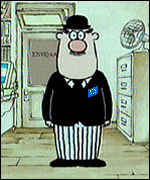 According to the British government, £45bn per year is “lost” through unpaid taxes although lost is the wrong word because that would imply that they had the £45bn in the first place which they haven’t.  And where does this £45bn figure come from?  If they know who isn’t paying their tax, why aren’t they making them pay it?

The British government has entirely the wrong idea when it comes to tax.  Their approach is “we need more money, what taxes can we increase?” when the best way to increase tax revenue is to lower taxes.

Not convinced?  It’s quite simple.  People pay taxes on the money they earn and the money they spend.  To earn money you need a job.  There aren’t enough jobs to go round so you need to create new jobs.  To create jobs you need someone to sell your products to.  For people to buy your products they need money.  The more money the British government takes off people in taxes, the less money they have to spend on stuff so the less the companies produce and the less staff they require.  It’s not rocket science, it’s just a variation on the “give a man a fish and he will feed himself, teach a man to fish and he will feed his whole village” line that charities use in their begging letters.

But it doesn’t stop there.  When Labour introduced the socialist wet dream otherwise known as tax credits, they abolished tax allowances.  Some people ended up better off, some people ended up worse off, most people were no better or worse off than before.  The side effect of removing tax allowances and replacing them with direct payments as full or partial refunds of tax paid is that two systems are now required where only one was before.  Instead of paying one lot of people to use one set of computer systems to collect tax off people, our taxes now pay for two lots of people and two sets of computer systems – one to collect the tax and the other to give it back.  All it did was create a load of unsustainable jobs, further complicate the tax system and increase the number of people who rely on the benevolence of the state (yes, I’m being sarcastic) to pay the bills.  There is no sense in taxing somebody and then giving them some or all of their taxes back – don’t collect the tax in the first place and it works out much cheaper!

But that’s still not the end of it!  When people have more disposable income they spend more on frivolous items which attract VAT.  The more people spend on commodities, the more tax they pay.  The more shiny things people buy, the more tied into the work ethic they get and the less likely they are to give up working and sponge off the state.