The case for a British Confederation

May 23, 2011 wonkotsane Britain, England, Northern Ireland, Scotland, Wales 27 comments
! This post hasn't been updated in over a year. A lot can change in a year including my opinion and the amount of naughty words I use. There's a good chance that there's something in what's written below that someone will find objectionable. That's fine, if I tried to please everybody all of the time then I'd be a Lib Dem (remember them?) and I'm certainly not one of those. The point is, I'm not the kind of person to try and alter history in case I said something in the past that someone can use against me in the future but just remember that the person I was then isn't the person I am now nor the person I'll be in a year's time.

Yesterday I explained that I don’t want a vote on Scottish independence and predicted how Alex Salmond would approach “independence” for Scotland. 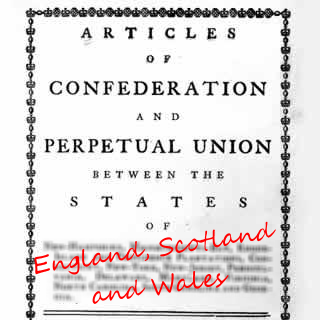 If I am right about my prediction of what form Scottish “independence” will take is right – ie. a confederation – then that’s not necessarily a bad thing.  The ideal way to govern the UK is with a confederation where the home nations voluntarily pool resources and responsibility for matters that they choose to co-operate on such as defence and foreign affairs.  This differs from federation or the current system of devolution in place in Scotland, Wales and Northern Ireland in that the powers the confederal government has are passed up from the countries that are part of it rather than being passed down from a federal government.  It’s an important differentiation because it means the members of the confederation retain their independence and sovereignty within parameters agreed by those members rather than being told what independence and sovereignty they are allowed from the centre.  But such a confederation would have to be between England, Scotland, Wales and perhaps Northern Ireland, not between Scotland and “Britain”.

This isn’t just idle conjecture on my part, I have been giving the idea of a confederation thought for some time now.  Here’s how I see it working:

An elected confederal “senate” would replace the House of Lords dealing with defence, foreign affairs and whatever else is handed up to the confederal government and an independent English Parliament would govern England as a sovereign nation within the confederation.  Scotland and Wales would similarly be governed as sovereign nations by their own government.

Northern Ireland is a bit of an oddity and might not choose to take part in a confederal government in the same way.  Clearly unification with the Republic is not the answer – it would alienate and antagonise at least half the population and it’s not in the spirit of the Good Friday Agreement – so why not give Northern Ireland the same status as the Channel Islands and the Isle of Man and make it a Crown Dependency, governing itself as it does now with the confederal government responsible for its defence and jointly for foreign affairs as it is for the Channel Islands and the Isle of Man?

The confederation would be the legal successor to the union, taking over the UK’s seat on the UN, NATO, the EU and any other organisation the UK is a member of unless the members agree that one of their number should become the successor state instead such as Scotland taking over the UK’s membership of the EU as the most europhile nation in the UK.  It would also mean that the Crown Dependencies and Overseas Territories (Falklands, Bermuda, etc.) would work in the same way and could even become members of the confederation on equal terms to England, Scotland and Wales.

A confederation also neatly sidesteps the issue of a federation being unconstitutional under English law.  One of the key properties of a federation is that the existence of the devolved legislatures are protected by law in perpetuity.  Under the English constitution, no British Parliament may bind its successor making it impossible to legislate in this way.  A new English Parliament for an independent England wouldn’t need an Act of the British Parliament to protect its existence, nor would it need an Act of the English Parliament to do so as its existence would be implicit in the fact that England would be an independent, sovereign nation voluntarily delegating powers to a “British Confederation”.  The English and Scottish Crowns can remain united in a personal union as they did before the 1707 Act of Union and the Queen can remain Head of State either through being Head of State of the confederation or the members in their own right.

The members of the confederation would be free to pursue their own economic policies, raising or lowering taxes, increasing or decreasing spending.  Scotland can become the socialist republic it strives to be, England can continue down the road of free market enlightenment.  Scotland can go nuclear-free, England can keep the lights on.

One of the criticisms of supporters of an English Parliament is that they never come up with anything other than a nebulous idea about self-government.  In the case of the Campaign for an English Parliament that’s deliberate because, to paraphrase the Scottish Claim of Right, they quite rightly say that it’s for the people of England to determine the best form of government for themselves.  Well I’m a person of England and I think this is the best form of government for my country.  Discuss.