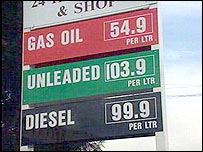 The Daily Mail has a tendency to invent random connections but this headline at UK Daily Pundit is too tenuous even for them!

A member of a transport industry pressure group called Transaction 2007 says that he attended a secret summit where business leaders demanded protests.  The member – Andrew Spence – was once a BNP candidate which leads UK Daily Pundit to post the headline “Far-right set to cause chaos with fuel blockades”.  There’s even the obligatory association of UKIP with the BNP in the comments even though they’ve got nothing to do with the story.  Pure Tory.

The issue is a serious one.  The last lot of protests were going well until Traitor Bliar summoned Rupert Murdoch to Downing Street, following which the Sun started publishing the British government’s propaganda on the protests and public support stopped overnight.  The price of fuel is mostly tax and it affects every single one of us directly, whether you drive or not.  Most goods are transported around the country by road and the more the fuel costs, the more it costs to transport – a cost that is passed on to the consumer.

The British government ended the last set of protests with the help of Rupert Murdoch and some outrageous propaganda.  Amongst the lies put out by the British government were tanker drivers being intimmidated and even attacked by protesters, roads to refineries being blocked by lorries and the emergency services and military running out of fuel.  Firstly, the police were present at all the protest sites.  Intimidating or attacking tanker drivers or blocking roads would be a criminal offence and the police were there to deal with any law breaking.  Funny how the news footage never showed a single incident.  Secondly, the military have their own pipelines from refineries so they don’t have to rely on vulnerable road transport.  You can even buy maps showing the pipelines.  The emergency services and military were never at risk of running out of fuel.

One thing the British government can’t rely on this time around is Rupert Murdoch’s blind devotion to the Scottish Raj (he only backs winners).  Gordo the Goblin King might find it a bit more difficult to buy the front page of the Sun this time around. The Crossrail project – a huge train network in the south east of England, centred on London – is estimated to cost the taxpayer £16,500,000,000.

The breakdown is as follows:

Under the Barnett Formula, Scotland is entitled to £500m purely because £16bn is being spent in England.  It doesn’t matter that the money is being spent on London and Crossrail will benefit nobody outside of the London commuter belt.  It doesn’t even matter that Scotland doesn’t need the money or have anything in particular to spend it on.  They will get half a billion pounds simply because the Scottish Raj won’t risk losing Scottish votes by abolishing the unfair Barnett Formula.

Scotland gets its own budget, a multi-billion pound subsidy from the English taxpayer, its own parliament and its MPs treat England as a personal feifdom.  Then they pull this kind of stunt which really rubs salt in the wound.

According to the Daily Telegraph, the British government is abandoning its plans to introduce a national road pricing scheme.

Peter Roberts – anti-road pricing campaigner and prospective UKIP MP – started a petition on the 10 Downing Street website which went on to attract over 1.8m signatures.  Initiailly, Traitor Bliar dismissed the petition out of hand saying that we, the uneducated masses, just don’t know what we’re talking about and that the British government knows what’s best for us.

The current Road Pricing plan was the brainchild of Alistair Darling, MP for Edinburgh South West, when he was Secretary of State for Transport.  The Road Pricing legislation will only apply in England because transport is devolved.

It appears that road pricing will now take a local form – like the Congestion Charge in London – rather than being done on a national basis.

No Mandate Brown, the One Eyed Wonder of Wankistan, left the Treasury months ago but the effects of his clandestine tax and spend policies are still being felt.

Today the price of fuel hit the £1 mark in several places around the country thanks to the 2p increase in fuel duty he introduced before he was appointed as unelected supreme leader of the Soviet Socialist Republic of New Britain.

Over 50% of the price of a litre of diesel is now fuel duty alone which is the highest rate in Europe where the average is 22.7p on a litre.  The Freight Transport Association reckons that the increased fuel duty will increase the annual operating costs of an HGV by an average of £870 to £35,600.

When I went to primary school 20-odd years ago we had two types of maths lessons – “mathematics” and “practical maths”, the former using metric and the latter using imperial.  Now they don’t teach imperial measurements despite them being the only legal form of measurements in America and being used in many countries worldwide, mostly in the Anglosphere.  Kids now are only taught metric.

Some local authorities have tried putting up metric road signs but these are illegal and they’ve been forced to take them down.  This applies to road signs, footpath signs and bridleways.  This explains the road signs you sometimes see sited at 110yds (100m), 328yds (300m) or 383yds (350m) from it’s destination.  However, it doesn’t seem to apply to the British government.

The Terrorism Act bans unauthorised protests with 1km of Parliament.  That’s one kilometre, not one mile.  The foot and mouth regulations DEFRA have put in place specifies exclusion zones and observations zones in kilometres, not miles.

The BBC have recently started using metric in place of imperial rather than giving the metric measurements in brackets afterwards or vice versa.  The British government pulls most of the strings in the BBC, the EU pulls the rest of them through it’s propaganda funding of state broadcasters.

There is no need to replace imperial measurements with metric.  Most people are still unfamiliar with metric and we still do more trade with the Anglosphere than we do with Federal Europe so imperial is much more relevant to English people than metric.  Metricating road signs will cost billions and it will take years (and millions of pounds of speeding fines) before people get to grips with the foreign measurements.  It is a thoroughly pointless exercise.

And who represented England?

The meeting of the British-Irish Council last week agreed to tie the UK and Irish driving licence penalty points systems into each other.

Steps are already being taken to harmonise the UK and Northern Ireland systems as the way the law stands at the moment, the holder of a British driving licence can accumulate 9 points on the mainland and 9 points in Northern Ireland without losing their licence.

Harmonising the UK and Northern Ireland systems is a sensible move, we are supposed to be part of the same union after all.  Recognising the points accumulated in the Irish Republic is also a good idea but it does set a precedent which might not be of benefit to English drivers.  The EU is always looking for ways to bring more things under their federal wing and this could be seen as a starting point for an EU-wide driving licence points and fines system, administered by the EU of course with a percentage of fines going straight into the EU propaganda fund.  Whilst the fundamental laws around driving – don’t drive at 80mph through a town centre (unless you’re “testing” a police car), don’t drive into pedestrians, don’t drive the wrong way down a motorway, etc. – are the same in most countries, the same cannot be said of all rules of the road and an English driver could quite innocently break some obscure local driving law and find themselves totting up enough points for a ban without even realising it.  For instance, in France it is an offence not to cover your headlights in those silly yellow covers or drive your English car without an EU sticker on it.  That could be 6 points under a harmonised points system.  Add to that a couple of speeding tickets from 3 or 4 years ago and you’ve got a driving ban.

Anyway, this is beside the point.  The main issue I have with this is that the British-Irish Council has no representation from England.  They have representatives from the Irish Republic, Scotland, Wales, Northern Ireland, the Channel Islands and the Isle of Man but England is represented by the British government which is also representing Scotland, Wales and Northern Ireland.  To make matters worse, No Mandate Brown has pledged to put the interests of Scottish people first in all his acts and deliberations and what really takes the piss is that No Mandate Brown can’t impose the changes on Scotland, Wales and Northern Ireland because transport is devolved!

Ruth Kelly, the new Transport Minister, has denied claims that the Department for Transport was blackmailing local authorities in England into introducing road pricing schemes.

This is an absolute lie and I know for a fact that at least one local authority in Shropshire is being blackmailed into introducing road pricing.

Shrewsbury is the mediævil county town of Shropshire. The entire town centre is a maze of one-way systems and pedestrianised areas. Most of the town is bypassed and the town centre, at its busiest, is almost never congested. In fact, the only time I’ve seen the town centre congested is when the buses all converge on the same stretch of road. Other than that, there is one major bottleneck at the Welsh Bridge and one at the Train Station. Congestion, of the sort you would find in a large town or city is none-existent. It is perfectly possible, in rush hour, to travel from one side of town to the other in no more than 10 minutes.

However, despite the patent lack of congestion, the Department for Transport has made funding of a new bypass (which has been postponed for years) dependent on the introduction of a road pricing scheme for the town centre. The Tory-controlled county council, which seems to have been as convinced by the global warming scam as the party, has put in a bid for funding for a pilot road pricing scheme.

If the aim is to remove the car from Shrewsbury town centre than it will be successful. A few miles down the road is the Telford Centre – several hundred shops in a covered complex with cheaper and more convenient parking and a good selection of brand-named stores. Shrewsbury, on the other hand, has an uncovered high street, a couple of small covered shopping centres and a 1960’s market hall that could only be improved by several tons of high explosives. Don’t get me wrong, unlike my fellow Telfordonians I really like Shrewsbury. The high street is full of timber framed buildings and little alleyways with overhanging timber framed buildings that really do make it possible to imagine yourself back in time 500 years. But beauty alone won’t be enough to stop people abandoning the town if congestion charging is introduced.

May 25, 2007 wonkotsane Transport No comments