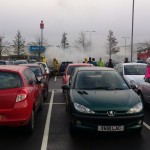 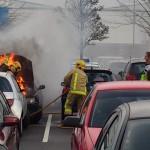 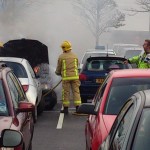 It’s easy to forget that while we’re all out spending our Christmas money in the sales or sitting at home watching TV, the emergency services are still out there putting their lives at risk and saving lives.  Often both at the same time.  This was only a small car fire but a fireman still had to stand in front of the car and open the bonnet so the fire could be put out – the second picture in the gallery above was taken seconds after he did.

I took part in an Opinium opinion poll last night and unusually for them got an “ethnicity” question at the end.  There was something a bit wrong with it though …

Needless to say I have expressed my disappointment to Opinium.

Census reveals rise of Englishness and death of Britishness

The 2011 census results have been released and they make for interesting reading.  I didn’t take a constructive part in last year’s census (not so much on ideological grounds but because I don’t trust the British government with the information) but it’s interesting reading nonetheless.

The ethnicity figures are a little worrying – only 59.8% of people in London identify themselves as having British ethnicity.  Ignoring the fact that there is no such thing as a British ethnicity, this isn’t a healthy statistic.  London is the political and media capital of the UK, the place where policy is formed and in no way does London give a realistic view of the UK which is one of the reasons why so much British government policy makes no sense.

In 2001, 9% of the population identified themselves as immigrants (ie. born outside of the UK).  Last year it was 13%.  Since 2001, something like 3.8m immigrants moved to England and Wales.  When we are so short of jobs and housing already, this level of immigration is simply unsustainable – it’s over 5% of the population.

The census data is supposed to drive British government policy and provision of services – that’s the reason given for compelling every adult in the country by law to complete the census – so it will be interesting to see how the 2011 census results drive policy.  The promotion of Britishness clearly has to stop, it’s a minority identity which costs tens (if not hundreds) of millions to promote and British government policy is geared around its exclusive promotion.  Most people in England identify themselves as English but this identity is subject to official policies of marginalisation and suppression.

Starbucks has caved in to pressure from left wingers over their tax avoidance and have promised to “do more” on its tax in the UK.

This is very disappointing because every single one of us – from the plebs right up to multi-national corporations – have a moral duty to demonstrate the utter stupidity and incompetence that is the UK and EU taxation system in the hope that one day the Chancellor of the Exchequer will realise that the only way to fix it is to burn all three volumes (yes, it’s that big) of the tax rule book and start again.

In the case of Starbucks – as with the left’s other favourite whipping boy, Vodafone – it’s EU rules on double taxation that allow them to get away with avoiding paying little or no tax in the UK.  The EU created the concept of a European company as one of the building blocks of its nationhood and has introduced several directives that allow holding companies or subsidiaries in low tax administrations to hoover up all the profits from other companies in their group to create a loss on paper and avoid paying tax.  Starbucks in the Netherlands receives all the profits from Starbucks in the UK where they pay the Dutch government’s 20% corporation tax instead of the UK’s 30%.  Vodafone operates a shell company in Luxembourg which receives the profits from (amongst others) Vodafone UK and pays Luxembourg’s 20% corporation tax.  Amazon and eBay are owned by holding companies in Luxembourg for the same reason.

All of this is perfectly legal under EU rules and there is nothing the Treasury or HMRC can do about it other than blow smoke and feed propaganda to left wing tax campaigners and anti-capitalists.  And the biggest irony of all is that the most vocal opponents of tax avoidance, the Guardian, operates a number of tax avoidance schemes itself – even the Guardian offices where millionaire socialist class warrior Polly Toynbee pontificates about the evils of capitalism for the half a year she doesn’t spend at her second home in Tuscany is owned by a tax avoidance company in the Cayman Islands.

If there was a Starbucks conveniently located in Telford I’d make a point of not going there as a personal protest at their caving in to hypocritical left wing bullies but we have about 400 Costa Coffee’s (who aren’t on the hit list) instead so I’ll just have to make do with moaning about it until someone uncovers who’s bankrolling UK Uncut.