Another Steve Uncles libel: I do NOT support his anti-Northern Ireland campaign

Once again I have to defend myself against the de facto leader of the English Democrats, Steve Uncles.

Some time ago Uncles wrote a letter to Sinn Féin offering to change English Democrats policy (that’s how policies are made in the EDP – Steve Uncles comes up with some batshit idea and hey presto it’s policy) to one of kicking Northern Ireland out of the UK and forcing them into unification with the Republic of Ireland in return for a bribe from Sinn Féin for his bankrupt party.

Naturally, Sinn Féin ignored him as he and his party are both non-entities and even convicted terrorists have some standards when it comes to dealing with lowlifes.

But as part of his fascist campaign against Northern Ireland, Uncles started a Facebook page called “Campaign to get Northern Ireland out of the UK”.  I wanted to make sure everyone who came across it knew who was behind the page so I posted the following comment on the wall of the page:

This page is the work of Steve Uncles of the English Democrats who wrote to Sinn Féin offering to adopt a policy of uniting NI with the Republic of Ireland in return for them bankrolling his party. There’s not a lot Uncles won’t do to get his £26,241 back from the party which isn’t surprising given that they are so heavily in debt and still got beaten by the Monster Raving Loony Party not long ago.

Steve Uncles doesn’t speak for England, most English people wouldn’t force a nation of 2m people to join another country against their will in return for a bribe from the political wing of a terrorist organisation.

As users of Facebook will know, before you can post a comment on the wall of a page you have to “like” it.  Which I did for as long as it took me to post the comment and then I immediately clicked the “unlike” link and removed myself from the page, leaving the comment exposing this terrorist-appeasing lowlife on the wall.

Predictably, the comment was soon taken off the wall of the Facebook page by Uncles but in order to try and damage my reputation, he has taken a screenshot of his status update showing me “liking” the page so I could post the comment and posted it on his English Passport blog without telling people that I only did it to post the above comment on the wall which he has deleted and telling them that I support his fascist campaign.

And of course he has mentioned the fact that I am in UKIP (which he tried to defect to this year but was knocked back) and the Campaign for an English Parliament (which he got thrown out of this year for bringing the campaign into disrepute) to try and damage their reputations with his lies as well.

Here is the comment I posted in response to Uncles’ libel on his English Passport blog which he still hasn’t approved (and probably never will because he’s a dishonest little turd): 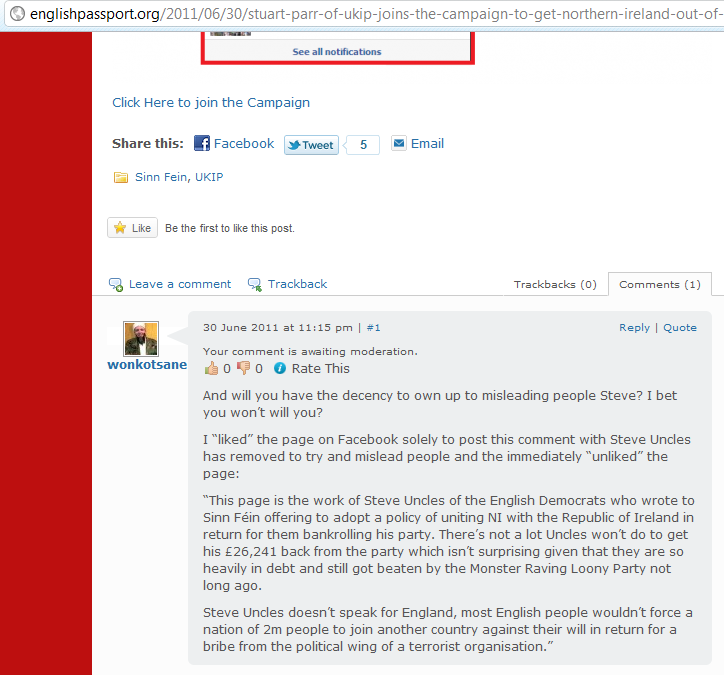 And here is a screenshot of the wall of the Victims of Steve Uncles page on Facebook posted straight after I commented on Uncles’ page: 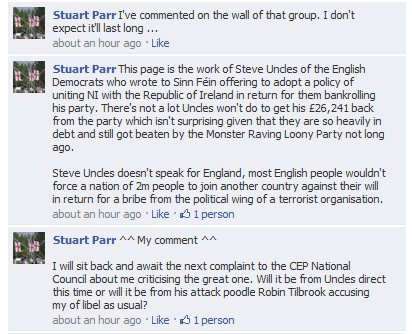 So will Steve Uncles, the lying, fascist, terrorist-appeasing lowlife failure be man enough to admit that he has deliberately mislead people and libelled me?  A complaint has been made to WordPress about the libel Steve Uncles has made in contravention of their Terms of Service and an email will be sent off to his attack poodle, the ineffectual “technically” leader of the English Democrats (and practising solicitor) Robin Tilbrook who I assume is Uncles’ personal solicitor as he is the one who makes all the threats and complaints against anyone who criticises the terrorist-appeaser nowadays.

Update:
Not content with libelling me, the terrorist sympathiser is now impersonating me rather than publishing my comments exposing his deception.  This is the best thing about terrorist sympathising scum like Steve Uncles – give them enough rope and they’ll hang themselves.  I think you’re going to need a better solicitor than Robin for this one Steve.  He couldn’t even manage to win a racial discrimination case for his own party when the bank admitted to racially discriminating against you, I don’t fancy his chances of getting you off this one! The British government have announced a £2.2m funding package for the BBC Arabic service after the BBC announced it was closing it as part of its cost-cutting measures.

Apparently the “valuable work” it does in the Middle East is more valuable than, say, the cost of 100 life saving courses of the breast cancer treatment, Herceptin, for English women who are left to die because the “National” Institute for Clinical Excellence thinks £20k is too high a price to save an English life.  Or providing free university tuition for a year for 222 English students who have been priced out of university education by the British government’s English university tuition fees.

Members of the NUT and ATL teachers’ unions are going on strike next week over proposals to make changes to their taxpayer-subsidised gold-plated pensions.

The Hutton Report recommends raising the retirement age, paying less out and requiring more in contributions and it is this suggestion that public sector workers should feel some of the pain as the rest of the population that has driven the unions into a frenzy. 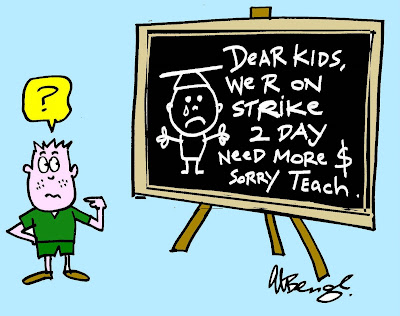 Over the last decade, teachers’ pay has increased above inflation, they get three times as many paid holidays as most other professions and have generous public sector pensions for relatively small contributions.  Meanwhile, in the private sector over the past few years we’ve seen unemployment go through the roof, pay frozen or even cut and pensions pillaged by the British Treasury to pay for, amongst other things, public sector pensions.

It’s not just teachers that are being incredibly selfish over public sector cutbacks though, it’s the public sector as a whole.  Lots of public sector unions are proposing strikes to try and protect their privileged taxpayer-funded terms and conditions.  Only this week a UNISON rep was on the radio saying that Shropshire Council workers were going on strike over cutbacks t0 their perks saying “we’re not asking for anything that nobody else has got”.  This was moments after explaining that two of the things they were striking over were guaranteed payrises and being paid a mileage allowance to drive to and from work.  How many people in the private sector get guaranteed payrises just for turning up and not getting sacked or paid by the mile to drive to work in a morning?

Because of the strikes next week, one of my kids won’t be allowed to go to school because his teacher is going on strike (the only one in the school).  That I don’t mind but another one is supposed to be doing his two link days at secondary school next week as he starts secondary school in September.  His link days have been cancelled, not even postponed.  He will go to secondary school in September not knowing his teachers, who is in his class, where his classroom will be or any of the other things they learn on these two days.  And all because some teachers don’t like the idea of having to pay for their own damn pensions.

The British Olympic Committee have caused outrage in Scotland and Wales by lying in a press release announcing the FA’s (or the English FA as they should more accurately be known) unilateral decision to field an English football team as “Team GB” in the Olympics.

The BOA has claimed that an “historic agreement” has been reached to allow players from all four home nations to play in a GB football team but the Scottish and Welsh FAs have both released statements saying they have been part of no such agreements and they will not take part in “Team GB”.

Put your factor 400 sun cream back in the drawer, the National Solar Observatory and US Air Force Research Authority have warned that we could be heading for a mini ice age within a decade thanks to a drop in sun-spot activity.

I remember the tail end of the scaremongering over the impending ice age when I started secondary school and that was 22 years ago.  Back then the scientists were convinced we were about to enter into another ice age, just like they’re convinced now that we’re going to see global warming.  The only difference is that back then the ice age propaganda wasn’t being used by politicians for political gain or to make corrupt scientists very rich and powerful whereas global climate disruption propaganda is.

I wonder what scare it’ll be in another 20 years’ time.