Lest the BBC forget …

Yesterday, while the country was observing a 2 minute silence to remember our war dead, a group of muslim extremists calling themselves Muslims Against Crusades were burning poppies and shouting “British soldiers burn in hell”. 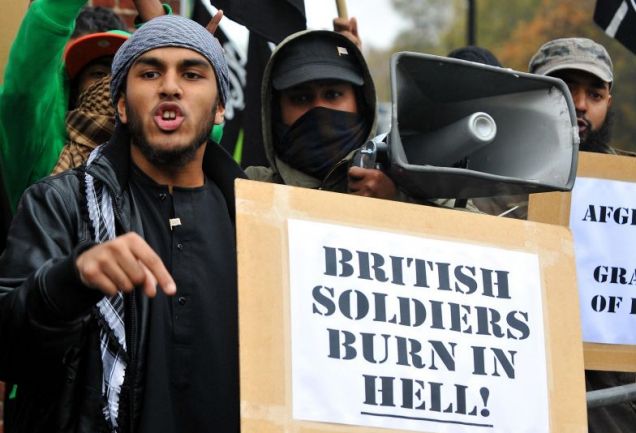 Not that you would have known this yesterday if you relied on the BBC News website for your news – until lunchtime today the story was censored by the BBC and it’s only been mentioned today because the BBC have been able to bury it in a story about the English Defence League.

Only one line in the middle of the story “EDL founder charged with Muslims poppy protest assault” – mentioned almost as an aside – is about the disgusting behaviour by Muslims Against Crusades yesterday.  The rest of the story is about six members of the English Defence League (including their leader) being arrested for affray after shouting abuse at the scum inciting hatred against our soldiers.  The fact that two Muslims Against Crusades scum were arrested is mentioned as an afterthought, almost as if it’s a vaguely related bit of information that doesn’t really matter.

The BBC is legally obliged, under its charter, to be fair, honest and impartial.  They censored a front page news story because it was about muslims behaving like animals and then when they eventually reported on it a day later it wasn’t about their behaviour, it was about the EDL kicking off at them.  Not fair, not honest and not impartial.

I have Three. Yay!

Talking to a colleague at work about his problems with Orange (pretty much the same we’re having at Chez Wonko), I decided to phone Orange again to see what the score was following my phone call on Saturday.  The person I spoke to actually seemed to be doing something so thinking I was on a roll I decided to phone Three again.

The colleague in question had sent me a link to a website that said Three were opting out of network sharing with Orange in areas where they had good coverage.  Three think they have good coverage here which is why they turned a mast off so maybe they’d opted out of network sharing where I live?  They haven’t but the person I spoke to said “we don’t want you to leave us, let me see if we can fix your problem”.

What have I got to lose?  I’m waiting for Mrs Sane to sort out Orange so we can change networks together and like I said on Saturday, if Orange sort out their problem I don’t necessarily need to change networks.

Imagine my surprise when I looked at my phone this morning and it was on Three.  Not only was it on Three, it had a full signal.  They phoned me today and said they’d changed something at the mast so that I would get coverage while they sorted out another mast for the area which should be operational in about 3-4 months time.