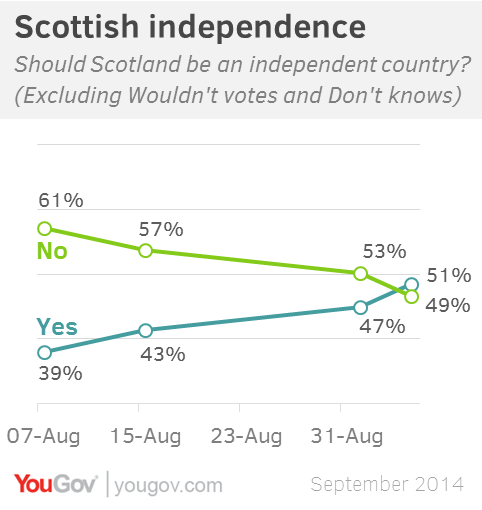 Tucked away on the BBC News website is a video mentioning the results of the Future of England Survey conducted by the Universities of Cardiff and Edinburgh for YouGov.

With the Scottish independence referendum a month away you’d thing a poll on English attitudes to devolution, independence and the relationship between Scotland and England after the referendum would be major news but no, it’s hidden away in the video “features” section. I can’t find an actual article about the poll at all, just this video which is using a new interactive video format the BBC are trialling which doesn’t work on mobiles or in Internet Explorer, thus limiting the already limited prospective audience who watch video even further.

There is clear support here for preventing MPs not elected in England from voting on English laws and for cutting the amount of taxpayers’ money Scotland gets so England gets its fair share. Most people want to keep open borders with an independent Scotland but don’t think they should be allowed to keep the pound. The majority are in favour of Scotland getting more powers over taxation and benefits spending and think England should have its own parliament. Over half think each English euroregion should have its own UK government minister but less than 1 in 10 think England should have regional government.

So, if the UK was a truly representative democracy with a government that listened to what people wanted and acted on it we would have a devolved English Parliament with a Secretary of State for England in the British government along with a minister for each English euroregion and the £11bn or so subsidy that’s given to Scotland would be abolished and shared equally with England. What we have instead is an ever increasing bill for Scotland’s profligate spending, MPs elected in Scotland making laws that only affect England, no English government of any sort and a sustained campaign to break England up into artificial regions.

YouGov dispenses with objectivity for No2AV

The other day I was invited to take part in a YouGov survey which contained, amongst others, a question about AV.

They vote for AV ... the mark of Satan is upon them. They must hang.

I don’t think AV is the answer to the democratic deficit in England as I have already said but I do support the change to the voting system because it’s better than First Past the Post.

Last week the increasingly desperate “no” campaign claimed spun one of their own pieces of “research” into a claim that “extremists” like the BNP will get into positions of power.  The desperation of the “no” campaign is evident in their use of Witchfinder General Warsi – a woman I wouldn’t believe if she told me water was wet – as a spokesperson.

So back to this YouGov survey and the question on AV:

Which of these would you prefer?

I said last week that it did no favours to the “no” campaign to misrepresent their opinion as fact and equally it YouGov no favours to accept what is so obviously a blatant piece of propaganda.  The question is worded so that it’s impossible to give the “wrong” answer – you either want to make it easy for “extremists” or hard for them.  No mention of the fact that it’s actually all small, unrepresented parties that will benefit and “extremists” only by virtue of the fact that they’re small and unrepresented.