Ian Paisley to be First Minister of NI?

December 4, 2006 wonkotsane Northern Ireland No comments
! This post hasn't been updated in over a year. A lot can change in a year including my opinion and the amount of naughty words I use. There's a good chance that there's something in what's written below that someone will find objectionable. That's fine, if I tried to please everybody all of the time then I'd be a Lib Dem (remember them?) and I'm certainly not one of those. The point is, I'm not the kind of person to try and alter history in case I said something in the past that someone can use against me in the future but just remember that the person I was then isn't the person I am now nor the person I'll be in a year's time. 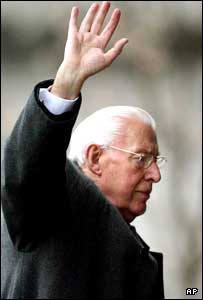 Reverend Ian Paisley, terrorist mouthpiece and sympathiser, says that he will accept the nomination of First Minister at Stormont if all his conditions are met.His conditions are that Sinn Féin prove that the IRA has been disbanded and its weapons decommissioned.

A war criminal heading up the British government and a terrorist heading up the Northern Irish Assembly.  Best learn the words to Starspangled Banner because the UK is fast becoming a rogue state.