EDM266: CONDUCT OF THE PRIME MINISTER AND THE SCOTTISH CLAIM OF RIGHT

November 15, 2007 wonkotsane No Mandate 5 comments
! This post hasn't been updated in over a year. A lot can change in a year including my opinion and the amount of naughty words I use. There's a good chance that there's something in what's written below that someone will find objectionable. That's fine, if I tried to please everybody all of the time then I'd be a Lib Dem (remember them?) and I'm certainly not one of those. The point is, I'm not the kind of person to try and alter history in case I said something in the past that someone can use against me in the future but just remember that the person I was then isn't the person I am now nor the person I'll be in a year's time.

Worm your way out of this Gordon …

That this House recognises that the Prime Minister is a signatory to the Scottish Claim of Right in which he declared and pledged that in all his actions and deliberations the interests of the Scottish people `shall be paramount’; believes that by declaring that the interests of the Scottish people should come first he has committed himself to discriminating against the people of England, Wales and Northern Ireland; considers this to be incompatible with being the Prime Minister of the United Kingdom of Great Britain and Northern Ireland in which office the interests of all UK people should be equal; and calls on him publicly to disassociate himself from and withdraw from the Scottish Claim of Right. 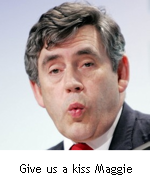 How can this MP, elected in Scotland on a narrow mandate of reserved matters, ever claim to be representing the whole of the UK?  He has no mandate to govern England and signed the Scottish Claim of Right pledging to put the interests of Scottish people first and foremost in all his actions.

Simple answer is, he can’t.  No mandate, no job – seems pretty simple to me.