No mandate reforms from no mandate PM

May 14, 2008 wonkotsane No Mandate No comments
! This post hasn't been updated in over a year. A lot can change in a year including my opinion and the amount of naughty words I use. There's a good chance that there's something in what's written below that someone will find objectionable. That's fine, if I tried to please everybody all of the time then I'd be a Lib Dem (remember them?) and I'm certainly not one of those. The point is, I'm not the kind of person to try and alter history in case I said something in the past that someone can use against me in the future but just remember that the person I was then isn't the person I am now nor the person I'll be in a year's time. 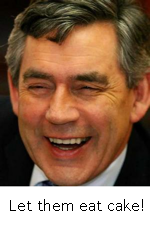 No Mandate Brown has set out his no-mandate “reform” programme (there’s that fucking word again – reform) to try and recover from the devastating trouncing Liebour had in the last by-election and nosediving support from traditional Liebour voters.

Let’s take a look at what batshit ideas he’s pulled out of his arse this time. I’ll use the BBC’s list …

Help for homebuyers
Great, what help will that be? Mortgages for cardboard boxes? House prices are too high and most of the council houses have been sold so people just don’t have anywhere affordable to live. Gordo’s answer is to buy unsold new houses and rent them to social tenants. But why are there unsold houses and why are they pushing for millions of new houses to be built over the next decade if they can’t sell the houses that are already built? Doesn’t apply to Scotland.

A savings scheme for low earners
What fucking planet do you live on Gordo? Low earners don’t have money to save, especially after you – sorry, your sockpuppet Darling – took the 10p tax band away.

New rights for workers to request training
Ok, here’s how things work in business Gordo. The Treasury might be able to borrow a few billion quid whenever it can’t pay the bills but companies can’t and training costs money. Running a business is getting harder and more expensive thanks to stupid regulations and ever increasing taxes. What our struggling businesses don’t need is even more legislation making them less competitive.

Hospital funding will be linked to performance
Genius. A hospital under performs so rather than give them some cash to get their arse into gear, you take money off them. Too much stick and not enough carrot as per fucking usual. Doesn’t apply to Scotland.

Elected police chiefs
Great. Will this be “indirectly elected”, ie. voted for by their peers? Or will us peasants be given a vote? Politically aligned police chiefs, just what we need. Doesn’t apply to Scotland.

£2.7bn tax cut
An entirely unfunded tax cut paid for by borrowing £2.7bn on the private market increasing public debt significantly. The Treasury is insolvent, how long before one of the high street banks files for a winding up order? To be fair, that might not be such a bad thing – we might get someone running the Treasury who’s got even a vague idea of how to run the fucking economy.

Jobless training and skills assessments
Sorry but about 10 years ago I had an operation and I was left unemployed as a result (I think I must have been temping). I hadn’t paid enough national insurance so I had to go on Jobseekers instead of getting Income Support or Incapacity. Despite being medically unfit I had to sign on once a fortnight and they even made me go on a training and skills assessment. This is nothing new … unless Liebour abolished them? Doesn’t apply to Scotland.

Parents councils to help runs schools
Erm … I can’t actually pick fault with that, parents need to be more involved in their children’s education – especially when they’re getting filthy propaganda shoved down their throats. Doesn’t apply to Scotland.

Rights to flexible working for parents
See the above comment on the right to training. Employers need people to work set hours to fit in with their business. Doesn’t apply to Scotland.

Tests for immigrants
Yeah because the citizenship test has been such a success. Perhaps the rule that exempts immigrants from taking the test if they don’t speak English wasn’t such a good idea after all.

Lords reform
No. No, no, no. Fucking NO! Put it back to how it was before the grinning monkey faced fuckwit that preceded you broke it. Elected Lords or appointed Lords are a disaster for democracy because it ensures that the party controlling the Commons controls the Lords as well. Hereditary peers mean the political make-up of the Lords is decided by an accident of birth, not by toadying up to fuck face Brown or coming with stupid populist ideas to appeal to idiot voters who’d vote for a monkey if it had the right colour rosette.

Party funding reform
This had better not include state funding for parties or I seriously am going to pop a vein. By far and away the biggest bunch of thieving bastards in the Commons are the Liebour Party. The only reason harsher rules are needed on party funding is because Liebour are so fucking corrupt.

Consultation on the Bill of Rights
WE. ALREADY. HAVE. A. BILL. OF. RIGHTS. We don’t need another Bill of Rights, we just need the existing Bill of Rights honoured. That means abolishing all forms of summary justice, including parking fines and speeding tickets. No conviction, no fine. End of.

Introduction of a National Coroner Service
Riiiiight. And this is vitally important and worth spending money on when you’ve just borrowed £2.7bn for a by-election bribe is it? Doesn’t apply to Scotland.

I make that 14 pledges, only 7 of which apply to the people in Scotland who voted for him. Democracy? What democracy? Come the revolution, he’ll be the first against the wall.