Telford wants to be a speed camera pioneer

December 2, 2008 wonkotsane BBC Bias, Propaganda, Transport 2 comments
! This post hasn't been updated in over a year. A lot can change in a year including my opinion and the amount of naughty words I use. There's a good chance that there's something in what's written below that someone will find objectionable. That's fine, if I tried to please everybody all of the time then I'd be a Lib Dem (remember them?) and I'm certainly not one of those. The point is, I'm not the kind of person to try and alter history in case I said something in the past that someone can use against me in the future but just remember that the person I was then isn't the person I am now nor the person I'll be in a year's time.

Telford & Wrekin Council are on the offensive promoting their plans to put average speed cameras on the A442 dual carriageway through the town and surprise, surprise, the BBC have stepped in to do their propaganda work for them.

The A442 dual carriageway – more commonly known as the Eastern Primary locally – is one of the safest roads of its type in the country.  The number of accidents and casualties was very low for a busy 70mph dual carriageway with lots of junctions running through the middle of a town.  But the “experts” at the council weren’t content with having one of the safest roads in the country, they had to mess with it.

A couple of years ago they decided to change the layout of the road, making some of the dual carriageway a single carriageway creating filter lanes.  They also dropped the speed limit from 70mph to 60mph.  A year or so later and the number of accidents is down but the number of casualties is up which means that the accidents that are still happening are involving more people and/or vehicles and the road is more dangerous than before they buggered about with it.

The sensible thing to do would be to put the road back the way it was and make it safer again but local authorities aren’t sensible so what they’re actually planning to do is put up more signs and install average speed roadside tax collectors “safety” cameras.  Signs such as this one on the side of the road in question, telling you may accidents there have been on the road: 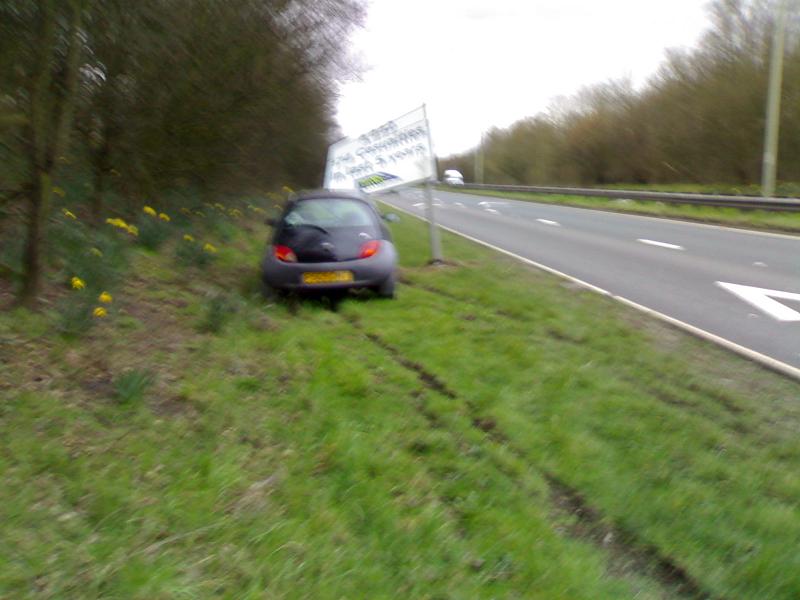 Yes, that’s a Ford Ka embedded in the road sign.

The BBC failed to mention the fact that the council had made the road more dangerous in their piece which devoted about three quarters of its 1 minute 44 clip to promoting the speed cameras and included footage of another stretch of the A442 that isn’t in Telford and is about 5 or 6 miles from where the speed cameras are planned.  Peter Roberts, the anti-road pricing campaigner and head of the Drivers Alliance, got a few seconds to put across the sole voice of reason just before they switched to a picture of a roadside memorial to someone killed in an accident.