March 28, 2009 wonkotsane Tories, UKIP No comments
! This post hasn't been updated in over a year. A lot can change in a year including my opinion and the amount of naughty words I use. There's a good chance that there's something in what's written below that someone will find objectionable. That's fine, if I tried to please everybody all of the time then I'd be a Lib Dem (remember them?) and I'm certainly not one of those. The point is, I'm not the kind of person to try and alter history in case I said something in the past that someone can use against me in the future but just remember that the person I was then isn't the person I am now nor the person I'll be in a year's time. 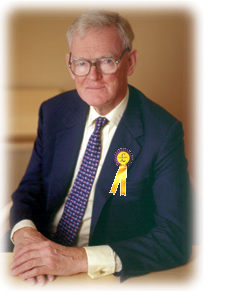 Stuart Wheeler, the multi-millionaire who has donated millions to the Tories, has defected to UKIP.

When David Camoron reappointed arch-eurofederalist Ken Clarke to his shadow cabinet, he managed to not only irritate vast swathes of the Tory membership but also Stuart Wheeler, their biggest donor.

Wheeler warned Camoron that he wasn’t happy and they needed to buck up on their eurosceptic credentials or he was walking.

According to Wheeler, Camoron had a meeting with 70 Tory MPs and told them the European Empire isn’t an issue and this was the straw that broke the camel’s back. Wheeler has defected to UKIP and written a cheque for £100k to the party.

The public know that the EU is incompetent, ineffective, hidebound and riven with fraud but the current political class in Westminster don’t want to talk about it. I believe that millions of people want a say on the matter, and by voting UKIP they can be heard.

The LibLabCon have telling the media at every opportunity that UKIP has collapsed and that the party is going nowhere. One thing you can be sure of is that self-made millionaires don’t get to be millionaires by backing losers.

Update:
Iain Dale isn’t bovvered. Honest. Face? Bovvered? Stuart Wheeler has “committed an act of gross disloyalty” apparently. But not Camoron when he knowingly appointed Ken Clarke in the knowledge that it would mean losing their biggest donor.