October 9, 2009 wonkotsane Regions 3 comments
! This post hasn't been updated in over a year. A lot can change in a year including my opinion and the amount of naughty words I use. There's a good chance that there's something in what's written below that someone will find objectionable. That's fine, if I tried to please everybody all of the time then I'd be a Lib Dem (remember them?) and I'm certainly not one of those. The point is, I'm not the kind of person to try and alter history in case I said something in the past that someone can use against me in the future but just remember that the person I was then isn't the person I am now nor the person I'll be in a year's time.

Last night I went to Smethwick with the Campaign for an English Parliament to protest against the Regional Grand Committee for the West Midlands. 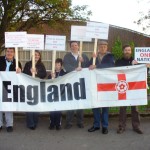 We waved placards and held up a 12ft banner (with difficulty).  Lots of motorists were stopping in the road to read them and quite a few were honking horns in support and giving us the thumbs up.  The police didn’t seem too fussed at the cars stopping in the road – certainly less fussed than they were at the prospect of me having my mobile phone in the meeting or carrying some leaflets .

We heckled a few MPs as they drove in, mainly asking “can we have our country back please?”.  Khalid Mahmood, a Liebour MP in Birmingham, was chauffeur driven to the event like the good socialist that he is.

Shropshire Tory MPs, Mark Pritchard and Philip Dunne, were there even though the Tories were supposed to be boycotting the regional grand committees.  My MP, David Wright, was also there, sat in the back row on his own.  Seven opposition MPs turned up (most, if not all, Tories) which enabled the meeting to go ahead.  Without them the Liebour MPs wouldn’t have been quorate and the meeting would have fallen at the first hurdle like the East of England one did.

The questions were all pre-prepared, as were the answers.  I left halfway through shouting “Home rule for England” and “English Parliament please” which the usher didn’t approve of and promptly ushered me out of the room.  By the time I left they has done nothing more than read from scripts and have the occasional half-hearted jibe at the Tories.

The police wouldn’t allow me to take leaflets in the room but refused to tell me what law banned leaflets in a public meeting and they also made me turn off my phone but wouldn’t tell me what law banned mobile phones in a public meeting.  An MP walked through the metal detector and set it off.  Someone said “She’s an MP” so she was waved through.  I said “She might have a knife or a gun” but was told “She’s an MP”.  Bearing in mind the rampant lawlessness of MPs, they are statistically more likely to have been taking something into the room that they shouldn’t have been than I was so why weren’t the police doing their job of protecting the public?  I had my son with me and I was under strict instructions not to get arrested so I didn’t create too much of a fuss but I’ll be making a complaint to the police about officers making up the law as they go along.