I don’t want a vote on Scottish independence

May 22, 2011 wonkotsane Britain, England, Northern Ireland, Scotland, Wales 5 comments
! This post hasn't been updated in over a year. A lot can change in a year including my opinion and the amount of naughty words I use. There's a good chance that there's something in what's written below that someone will find objectionable. That's fine, if I tried to please everybody all of the time then I'd be a Lib Dem (remember them?) and I'm certainly not one of those. The point is, I'm not the kind of person to try and alter history in case I said something in the past that someone can use against me in the future but just remember that the person I was then isn't the person I am now nor the person I'll be in a year's time.

So it’s a couple of weeks since the SNP romped home to a comprehensive victory in the Scottish Parliament elections and there’s still no sign of an independence referendum but there is still plenty of talk about what the “independence” will be and who should have a vote. 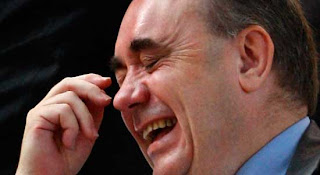 So I sez "Aye, give us a coupla billion and we wunnae hold the referendum". I didnae expect him tae do it!

Scotland will never be independent, even if it leaves this union because the SNP intends Scotland to be a member of the EU, leaving a union it has a disproportionate amount of control over for a union in which it will be a tiny irrelevant voice.  But that’s a decision for the Scots to make and if they choose to take that path then more fool them.

Alex Salmond has already been talking down independence and suggesting what will be, in all but name, a confederation of Scotland and “Britain” in which Scotland remains in a union voluntarily and on their own terms with “Britain”.  Presumably he has looked at Dubai’s bailout of Abu Dhabi and decided to hedge his bets.

Lots of people are demanding a vote in Scotland’s independence referendum, arguing that if the union is to be dissolved then it’s not just the Scots who should  be able to vote on it.  I disagree for two very good reasons:

Firstly, whether Scotland decides to declare independence or not is Scotland’s business – a declaration of independence is an affirmation of sovereignty and you can’t affirm your sovereignty by asking for someone else’s permission.  The UK or “Britain” isn’t a country, it’s a union of countries and if one of them decides it no longer wants to be in that union, it’s nobody’s decision but their own.

Secondly, Scottish independence won’t mean the end of the union, the Brits will keep “Britain” going for as long as possible in a sad parody of its former self like Serbia federating with Montenegro and calling itself Yugoslavia not because the Serbian people identified themselves as Yugoslavian but because the Serbian political class that dominated Yugoslavia refused to accept the reality of post-Yugoslav Serbia.  The same will happen in England – the British political class will refuse to accept the reality that they have put Scotland on such a high pedestal that the union will seem irrelevant without them and will do whatever it takes to keep “Britain” in existence that little bit longer.

To ensure that Scotland stays in some form of union with “Britain”, the Scots will be comprehensively bribed.  The union started with England paying Scotland’s national debt and a bribe on top to be shared amongst the Scottish people which was promptly stolen by Scotland’s great and good and the end of the union will similarly marked by a Scottish cash bonanza at the expense of the English taxpayer.

The day after the SNP won the Scottish election, David Cameron gave Scotland a £2bn bung for no other reason than Alex Salmond had won the election.  This is the first of many bribes from the British government and it won’t just be handing over billions on pounds of English money, it will be political concessions as well – more independence, a greater say in what happens in England, more Scottish representation at Westminster, more Scots in key British cabinet positions, more British (English) government departments located in Scotland, more “respect” for Scotland.  The divorce settlement will cost England dearly if it is negotiated between the Brits and the Scots.

I don’t want a vote on Scottish independence (although I would vote yes if I did) because it’s none of my business as an Englishman living in England.  I am agnostic about the union – if the union survives or if England stays in it or not is something I won’t lose any sleep over but if the union survives and if England stays in it then it has to be on equal terms with Scotland, Wales and Northern Ireland with an English Parliament and fiscal autonomy, just the same as Scotland.  But if the terms of the union – and England’s relationship with the other members – are to be fundamentally renegotiated then that renegotiation has to be done between England and the rest of the UK, not “Britain”.

The British can’t be relied up to represent English interests, we must have an English government to negotiate on our behalf.