August 29, 2010 wonkotsane Come the revolution, England, Free Speech, Police State, Propaganda 3 comments
! This post hasn't been updated in over a year. A lot can change in a year including my opinion and the amount of naughty words I use. There's a good chance that there's something in what's written below that someone will find objectionable. That's fine, if I tried to please everybody all of the time then I'd be a Lib Dem (remember them?) and I'm certainly not one of those. The point is, I'm not the kind of person to try and alter history in case I said something in the past that someone can use against me in the future but just remember that the person I was then isn't the person I am now nor the person I'll be in a year's time.

The English Defence League (EDL) held a “static protest” in Bradford yesterday which was typically marred by violence.

The original plan was for the EDL to hold a march through Bradford but the Chief Constable of West Yorkshire Police, Sir Norman Bettison, successfully got the Home Secretary, Theresa May, to ban any protest marches in Bradford this weekend so they held a “static protest” instead. 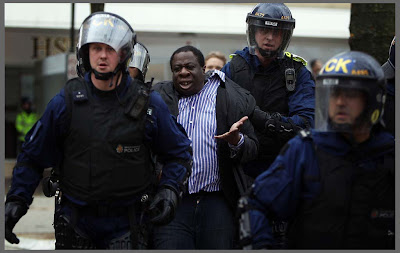 But wherever the EDL go, of course, the extreme left wing fascist group, Unite Against Fascism (UAF) follow to wreak havoc.  The order to ban the EDL from marching no doubt came from her boss, David “Cast Iron” Cameron who is a supporter of the UAF fascists (the list of MPs supporting the UAF was removed after it was splashed all over the papers but nothing ever disappears forever on the internet).

The EDL have a right to protest, yes, but we must not allow them to provoke us into violence.
– Ratna Lachman, Bradford Women’s Peace Project

I’m surely not the only person who sees something wrong with this comment?  If The Muslim Community turns to violence – which they did yesterday and have done at every EDL protest – then it’s because they’ve been provoked into violence.  How has this been allowed to happen?  Why have the Brits allowed extremism in The Muslim Community in Bradford to reach such epidemic proportions that a protest march by people opposing Islamic extremism could “provoke” them into violence?

We thank people for their patience and support so far and we hope to have protesters removed from the city as soon as possible.
– West Yorkshire Police “spokesman”

Again, I’m sure I’m not the only person to see something wrong with this comment either.  It is the job of the police to keep the peace and enforce compliance with the law, not to run people out of town like a wild west sheriff.  The EDL have a right to free assembly and peaceful protest.  They also have a right not to be harassed or attacked and the police have an obligation to protect those rights.  But instead, the objective of West Yorkshire Police was evidently to deny them their rights and to remove them from Bradford as soon as they could in case the EDL’s presence in the city provoked The Muslim Community into violence.

So what now for the EDL?  Almost a year ago I wrote about the EDL following their march in Manchester and again in April this year following a protest in Dudley.  At both protests the EDL were portrayed as the trouble makers with little mention of the UAF thugs despite the ratio of arrests to protesters being 1 in 250 for UAF and only 1 in 1,333 for the EDL – 3 arrests from 4,000 EDL protesters and 6 arrests from 1,500 UAF thugs.

I said that I had no interest in ethnic nationalism and I still don’t but I wonder if perhaps I’ve misunderstood the EDL?  Their website says they’re only interested in opposing Islamic extremism and the creeping influence of Sharia and not race so maybe we should give them the benefit of the doubt?  Some of their members are clearly more interested in white supremecism than opposing Islamic extremism but then that’s the same of any organisation that is even vaguely involved in any type of nationalism.  Even the Campaign for an English Parliament – a group that is extremely defensive of its non-partisan civic nationalism – has had problems with members or supporters who have developed an unhealthy obsession with race politics (we’ve rooted them all out to the best of my knowledge) and the English Democrats have some very unsavoury characters in their ranks despite being a primarily civic nationalist party.  The EDL have no control over who chooses to support them and the beliefs those people hold and it’s unreasonable to expect them to filter out the undesirables from the thousands of people that turn up to their protests.

The problem the EDL have is that they are a porous organisation.  They have to be to attract the kind of support they get at their protests.  The downside of this is that they are open to infiltration from all sides.  They have obviously been infiltrated by the likes of the National Front, the BNP and other ethnic nationalists and it is inconceivable that the police and security services haven’t already got people in the EDL chain of command.  The trouble that both lots of infiltrators cause at protests is bringing the day the EDL is proscribed closer.  One of their protests has been banned now, that sets a precedent for suppressing them.  Banning one of their marches establishes them as “wrong”, the next step will be to ban them from having any sort of protest and then to ban the group altogether.  The violence at protests will be cited as justification for banning them and the cost to the taxpayer of policing their protests will be used to convince the general public that banning the EDL is a good thing.  The UAF fascists and The Muslim Community will be exempt from the bans despite them being the cause of most of the trouble at EDL protests because they’re not “wrong”.

The media has already been mobilised against the EDL – a collective blind eye is turned to the UAF fascists and The Muslim Community whilst the violence and thuggery perpetrated by the extreme left is blamed on the EDL.  Despite being apolitical, the EDL are described as “far right” by politicians and the media, following the “right is wrong” mantra that the left have managed to implant into the collective psyche.  The left have managed to convince most of the population that the left wing nationalist socialist BNP are “far right” whilst the forces of anti-fascism are exclusively left wing which of course makes right wing bad and left wing good.  The truth is that the BNP are a left wing party, fascism is a centrist ideology incorporating both left and right wing ideologies and there are as many – if not more – anti-fascists on the right as there are on the left.  Opposing radical Islam and unfettered immigration does not make you a fascist, no matter what the vicious thugs in UAF and failed communists in the Labour Party say. 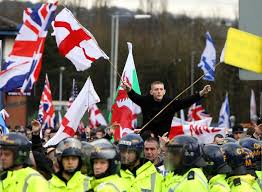 England is not Britain

So, back to my question a few paragraphs up: should we give the EDL the benefit of the doubt?  I am inclined to believe that the core few people that started the EDL and probably the majority of their supporters are not ethnic nationalists.  I agree that radical Islam has to be dealt with and I agree that Sharia is a cancer that needs to be excised and most people will agree with the EDL’s stated objectives and raison d’être.  What the English people need is a leader – someone in tune with English public feeling and clever enough to take on both the media and the British establishment.  The EDL and its leader, Tommy Robinson, have done a lot in a short amount of time but they aren’t going to lead an English revolution because the EDL is a tainted brand and the danger is that the EDL will end up tainting English nationalism as a whole through guilt by association, just as we are starting to win the war against Englishness.

I certainly won’t be supporting the EDL for the simple fact that they are British nationalists and I am an English nationalist and because I have no desire to get my head caved in by some psycho communist or a member of The Muslim Community for being on the “wrong” side of the police line.  That said, I would still be interested in observing an EDL protest first hand and if anyone from the EDL wants to arrange that, feel free to get in touch.

Recommended reading on the EDL and UAF:
Nourishing Obscurity
The Anger of a Quiet Man